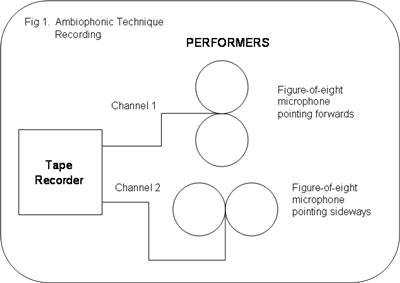 Figure 1 shows how the recording is made. The Reslo microphone has a ‘figure-of-eight’ polar diagram, i.e. it is sensitive to sounds coming from the front and behind, but not from the sides. One microphone is pointed towards the performers and placed a sensible distance from them. The other is placed about 3-5m further back and pointed sideways, so that it picks up no direct sounds but only sounds that are reflected from the walls of the performance space. On playback (Figure 2), the signal from the front microphone feeds a loudspeaker in front of the listeners, and that from the rear microphone feeds a speaker behind them. Peter recalls, ‘the Ambiophonic recording gave one a startling impression of being immersed in the acoustic of the chapel.’ (It should be noted that in the 1960s, ‘Ambiophony’ was used to describe the feeling of being in a good concert hall. Later, the term has become applied to a number of different techniques). 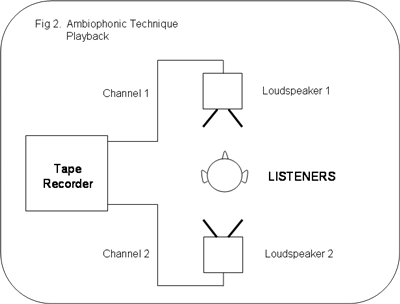