Michael’s experience of live recording led him to the view that using a coincident pair of figure-of-eight microphones gave a more faithful sound for classical and many other types of music than the multi-microphone technique used by most professionals. He vigorously promoted this view in an article entitled ‘Why Coincident Microphones?’ published in the March 1971 issue of Studio Sound (Vol 13, pages 117, 119, 140). It was a rebuttal of a previous article advocating multi-microphone techniques, whose author claimed that the recorded sound should be better than reality, because it is heard in the home, not in a concert hall. Michael gave a long list of those aspects of multi-microphone recording that he did not consider ‘better’, concluding ‘I do not believe that it is “better” to disguise the inevitable imperfections of a human performance and not to be able to hear what the musical intentions of the players were.’

the most satisfactory of all stereo images is obtained by the classic Blumlein technique, i.e. the use of 90 degree angled crossed figure-of-eights. Blumlein recordings have a most remarkable stereo stability, giving a well-centred image almost everywhere in the listening room.

It gave Michael great satisfaction to promote the work of his hero, Alan Blumlein, a prolific inventor whose work included devising a way of recording stereo sound on disc. Michael often exclaimed with admiration, ‘Blumlein was granted a patent every 16 days of his working life!’ I had the distinct impression that Michael saw himself as a successor to Blumlein.

The choice of microphone for Blumlein recording was obviously important. Michael recommended the Reslo RBT for the ‘impecunious amateur’, and wrote that ‘The best mike that I know for Blumlein recording is the BBC-type STC 4038 ribbon.’ These remarks were based on personal experience, since Peter had a pair of Reslos (the slightly different VRT model) Reslo Microphones which we used in the early days. Philip later bought a pair of 4038s which were used for OUTRS recordings during his time at Oxford. 'STC 4038 Microphones'.

In his article, Michael turned to the question of microphone placement. With gentle irony, he stated that

The rule here is so astonishing and difficult that many engineers seem to think that balancing up twenty or so mikes is a lot quicker. The rule is to walk around during a rehearsal or first run-through, find out what position makes the music sound best live, and then place the microphones at that precise point at ear height!

Michael concluded his article by writing

It is my belief that modern multimike techniques of recording not only damage many of the subtleties that lead to profound musical enjoyment, but are actually harmful in a purely commercial sense….Perhaps in its efforts to ‘improve’ on reality, the record industry is killing off the long-term musical interest so necessary for its continued health.

After publication, I was pleased that ‘Michael is very bouncy because his diatribe in favour of coincident figure-of-eights is beginning to cause a stir.’ I pretended that it was ‘infuriating to me because of a letter I wrote to Studio Sound last year saying briefly much the same thing.’ My letter was not published, but I’m sure it would have had little impact compared to Michael’s heartfelt and well-argued contribution, which is just as relevant today. He was ‘enormously chuffed’ by support from Peter Walker, the owner of the company making Quad amplifiers and loudspeakers, who said he agreed with everything Michael had written. ‘Michael obviously feels part of the in-crowd now!’

After Philip left in summer 1970, we needed to find suitable figure-of-eight microphones to replace his 4038s. Michael decided to purchase three Calrec CM 652 cardioid capacitor microphones which were pointed towards each other in the horizontal plane at an angle of 120 degrees. Peter designed a matrix circuit to produce an output from the three cardioids equivalent to a pair of 90 degree figure-of-eights, the device becoming known as the TWITGO: Three Will Into Two Go. He also designed an equalisation circuit which we called the CRONIC: Circuit for Removal Of Nastiness In Calrecs. It gave a flatter frequency response by removing a peak centred at about 7 kHz. 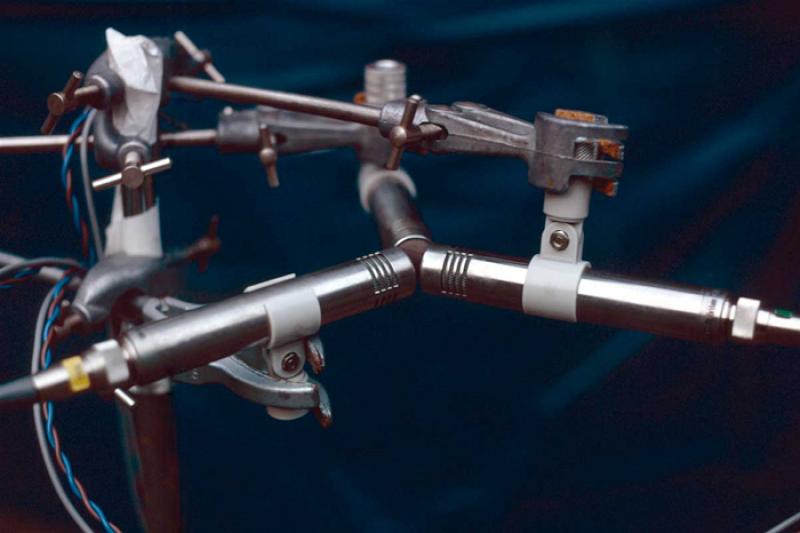 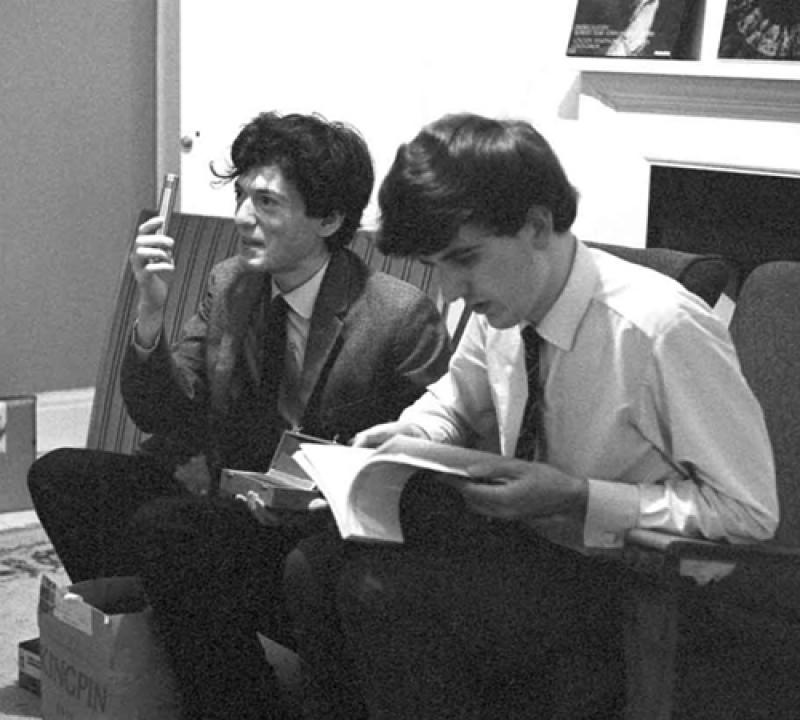 At first, the microphones were stacked on top of each other so all had an unobstructed ‘view’. Michael then

wrote a vast summary of his findings on two-channel reverberation pick-up of all different types of mikes, including the defects of our present three-Calrec system due to its non-coincidence. Clover leafs and vertical figure-of-eights keep creeping in - it sounds horrid. Anyway, if we alter the arrangement of mikes slightly, it will help.

This meant changing to a coplanar arrangement so that the microphones were more truly coincident.

I took the first photos of a recording session using this arrangement in January 1971 in Oriel College Hall, a venue which we hadn’t used before. The music included Stravinsky’s The Soldier’s Tale [C236/207], Walton’s Façade [C236/208] and Monteverdi’s mass In Illo Tempore [C236/327]. The setting-up, rehearsal and recording of the performance went well, but we didn’t like the acoustic in the Hall, which was very dead when filled with the audience. We analysed the tapes closely, to find out if we could hear differences from previous microphone set-ups. I thought ‘the acoustic was pretty nasty, though quite natural and gave good illusion of depth: could find relative position of performers quite easily though the absolute position was not pin-sharp’. Sibilants I thought sounded worse than on a previous recording of the Isis Singers in Worcester College Chapel, ‘so difficult to compare MAG’s new mike arrangement’. I noticed a curious effect in the Walton: the ‘dry acoustic enhanced the pointilliste writing, but the [reciters] seemed further away than most of the instruments’, even though they were standing at the front.

Soon after, we used the new microphone set-up to make a recording of Stravinsky’s Mass [C236/331] and other works performed by the Schola Cantorum of Oxford in Merton College Chapel. We regularly recorded the choir in this venue so it was easier to compare the new microphone arrangement with our previous ones. Peter and I listened to the tape and came to different conclusions.

He didn’t like the sound, saying there was no reverberation, but though it didn’t sound like Merton Chapel, it was probably preferable to our earlier stuff with 4038s. Apparently there is less treble than Michael predicts with coplanar triplet, especially in the reverb. signal – surprising. Had a dull, flat quality which Peter associates with the triplet, and which I associate with Merton Chapel.

Our increasing experience, and experiments with alternatives such as that in the Holywell Music Room, confirmed Michael’s view that carefully placed coincident microphones with a figure-of-eight polar diagram gave the most natural sound on almost all types of music (See photos of this session and scroll down to Holywell Music Room sub-heading).

However, our experience with different types showed that there was no ideal microphone for those with high standards but a limited budget. The best combination of good signal-to-noise ratio, flat frequency response and accurate polar diagram was not easy to achieve even with expensive professional microphones. The advantage of the three-Calrec arrangement was that Michael could readily extend it to a four channel system, as described in the next section on Tetrahedral Recording.