Michael had always wanted to capture the complete sound made by live musical performances, including the acoustic of the space in which the performance took place. At an early stage I recall being surprised to discover that the sound of an orchestra heard outside the auditorium through a closed door sounded much more spacious and realistic than commercial stereo recordings heard via two loudspeakers! 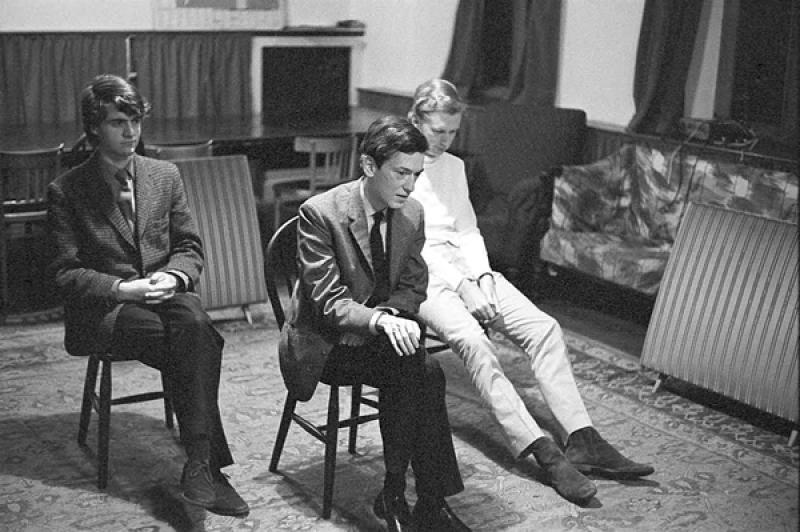 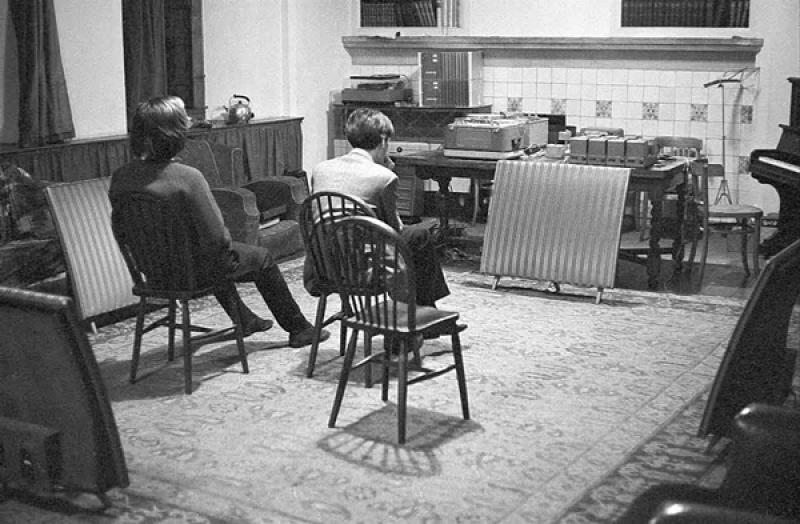 Four-speaker layout viewed from the rear, with Philip (left) and Michael. Four Quad Electrostatic loudspeakers were fed by two Quad 22 control units and four Quad II valve amplifiers. Tapes were played on Revox F36HS and Revox 736 tape recorders. Note the pair of two-channel Dolby A301s at the far end of the room. These had been collected for evaluation from Dolbylabs on the same day that these photos were taken.

Four-speaker layout viewed from the rear, with Philip (left) and Michael. Four Quad Electrostatic loudspeakers were fed by two Quad 22 control units and four Quad II valve amplifiers. Tapes were played on Revox F36HS and Revox 736 tape recorders. Note the pair of two-channel Dolby A301s at the far end of the room. These had been collected for evaluation from Dolbylabs on the same day that these photos were taken: see ‘The Dolby Experience’.

We tested the technique by listening to stereo master tapes of live concerts recorded using a coincident pair of figure-of-eight ribbon microphones, either Reslo VRTs or STC 4038s. The results were surprisingly impressive:

Once we’d got the [speaker] placement and volumes right, the effect was remarkable in giving greater presence, clarity and impact. But it also highlighted recording defects such as drop-outs, hiss, modulation noise, high-frequency overload and sibilant distortion, all because it was so much more realistic that the faults brought one up with a jolt to realise it was only a recording.

The results were very successful on Purcell’s Ode to St Cecilia in the reverberant acoustic of Merton College Chapel [C236/678], but less so on a concert recorded in the drier acoustic of the Sheldonian Theatre, when the image was displaced, at least when not sitting in the central seat (occupied by Michael in the photos). Even so, the treble seemed much better than in ordinary stereo.

We had previously found that it was not possible to play our recordings at a realistic sound level in Pusey House Common Room without overloading the Quad amplifiers and speakers when used as a conventional stereo pair, so the extra volume from the additional speakers was worthwhile. ‘The sound was subjectively louder, just as stereo seems louder than double mono. But the amplifiers/speakers still discharged [overloaded] on loud choral passages’.

It took time to adjust to listening in this unfamiliar arrangement. ‘Peter didn’t get the effect at first, when all the sound seemed to come from behind, but it improved later when he closed his eyes.’

We found that a good surround sound effect was given on Handel’s Dixit Dominus, recorded in the Sheldonian Theatre in a fine performance by the Schola Cantorum of Oxford and orchestra conducted by John Byrt [C236/75]. In this case the

sound seemed better from outside the listening area, where it was easily possible to pick out a particular voice in the choir and listen to that line to the exclusion of the others. Inside the area, the tape hiss and drop-outs were very distracting.

The sound from BBC broadcasts

was predictably less good because of almost no ambience, but some Beatles tracks were surprisingly improved. A simple track such as Julia [from The Beatles, also known as The White Album, PCS 7067, 1968] sounded much more spacious, but complex tracks sounded muddled.

Overall, on OUTRS recordings made with coincident figure-of-eight microphones, we were impressed by the generally realistic and spacious quality of reproduction, and the acoustic and ambience of the recording location were successfully captured.

Michael published the results of this experiment in the August 1970 issue of Hi-Fi News.

The article gives full details of how we set up the four speaker arrangement, and includes its shortcomings as well as its benefits.

Particularly impressive were recordings of the choir walking on to the stage past the microphones, in which the footsteps of the performers passed from behind the listener, to his right, and then in front of him. There seems to be no doubt that the “sum-and-difference” four speaker reproduction technique for stereo gives a genuine all-round sound.

He concludes, ‘The general success, on musical and natural recordings, of four-speaker reproduction of stereo indicates that properly recorded quadraphonic recordings should be something to really look forward to’.

This experiment was a stimulus for Michael to move forward to a four channel set-up, which offered the prospect of a more realistic surround sound effect, and is described in the section on ‘Tetrahedral Recording’.

Michael acknowledged that the four-speaker playback arrangement described here was invented independently by himself and David Hafler (see ‘Whither Four Channels?’)