Quadraphonics, as at present widely conceived, is a dead end.

Michael made this uncompromising statement in his article entitled ‘What’s wrong with quadraphonics?’ in the May 1974 issue of Studio Sound. He again attacked ‘erroneously conceived “quadraphonic” systems which leave the apparent localisation of sounds at the mercy of the listener’s imagination.’ After cataloguing the continuing faults of quadraphonic recordings, he went on to describe a new approach to surround sound reproduction, known as ‘Harmonic Synthesis’ or ‘kernel’ systems. The new approach started

from the observation that the effects one would like to produce include a continuum of directions around the listener. Such systems imagine a limited number of channels being used to convey the sound to the listener, but are designed to recreate a continuous range of directions around the listener approximating [to] the original. The mathematics used is not ‘matrix’ algebra (which is used only to describe transformations of a finite number of variables) but ‘kernel’ algebra (which is the corresponding mathematics used when one has an infinite continuum of variables).

He explained that he had recently become associated with the Ambisonic system, which was an example of a kernel system. It was supported by the National Research and Development Corporation (NRDC) and involved Professor Peter Fellgett of Reading University.

Michael went on to describe

a yet more advanced approach based on the kernel approach but designed to ensure the best possible results. I call this the ‘Psycho-acoustic’ approach because it is based on the idea of tailoring the sound field at the listener to give results as close as possible to the original effect picked up by the microphones or intended by the producer….Thus, rather than guessing a system and then trying to make it work, we said what we wanted it to do according to available experimental evidence on the human ears and constructed systems which would do this.

The results were used to show that some of the available kernel systems were capable of giving good results with special decoders, but that other systems, including some proposed earlier by Michael, were not.

In summary, Michael stated that the new generation of kernel systems would aim to overcome the problems associated with existing quadraphonic systems, and expressed optimism that this approach would ‘break the impasse caused by ‘quadraphonic’ approaches which could not even give reasonable results on master tape…’

Michael went into more detail in an article entitled ‘Surround-sound psychoacoustics’, which was published in Wireless World in December 1974.

There are a number of different mechanisms by which the ears localize sounds, including several low-frequency, mid-frequency, and high-frequency mechanisms, as well as information derived from the reverberation of sounds. With only a few transmission channels available, one cannot hope to satisfy them all, but most existing ‘discrete’ and ‘matrix’ systems do not satisfy more than one or two criteria. The … Nippon Columbia UMX system and the NRDC ambisonic system are the only ones so far to adequately allow for several criteria.

A key component of the Ambisonic system is the Soundfield microphone, which was co-invented by Michael and Peter Craven. The idea arose independently of the Ambisonic project, out of the wish to produce microphones which did not suffer from the problems of obtaining satisfactory figure-of-eight outputs associated with the triplet or quartet of Calrec microphones used for OUTRS recordings. The problems included imperfect frequency and phase responses, and lack of true coincidence. Peter Craven explains:

Peter’s original concept, as described above, was of a large sphere, perhaps the size of a football, covered in microphone capsules, the outputs of which could be added together to produce a microphone with an omni-directional polar response. By means of special circuits, the outputs on opposite sides of the sphere could be blended to create signals corresponding to a pair of 90 degree figure-of-eights, i.e. the classical Blumlein crossed pair. Instead of simply adding the outputs, a weighted sum is taken so that the capsules on one side are given a positive weight and the capsules on the other side are given a negative weight. Moreover, the pair could be made to behave as if the two microphones were perfectly coincident, which is of course impossible using real microphones. Peter and Michael called this concept the ‘Spherical Microphone’. The idea remained theoretical at first, since neither of them was in a position to produce a microphone to such a design.

It was only later that Michael realised that the concept formed the basis of a microphone which could accurately capture the sound arriving at it from all directions and allow this to be recorded and played back in a way which would allow the original sound field to be re-created. This was exactly what was needed to fulfil the aims of the Ambisonic system. Michael also worked out that the minimum number of microphones was four, in a tetrahedral array. He also removed the ‘football’, so that the sphere is now conceptual rather than physical, and substituted cardioid capsules for the omni directional ones assumed by Peter. This is similar to the arrangement used for the tetrahedral recording experiment [Tetrahedral Recording], but in fact the microphone should, with its associated matrix circuits, be regarded as a complete sound field transducing system. Once Michael became associated with the Ambisonic project, funds were made available to patent the design and permit development of the new microphone.

The Soundfield microphone made its appearance in February 1975. ‘Four-channel ambisonic recording today. The first time any of us in Oxford have seen the new MAG/NRDC set-up’. The recording was of the Schola Cantorum of Oxford, conducted by Nicholas Cleobury, in St Mary’s Church. It is typical of Michael’s wide–ranging interests that, at the same time as immersing himself in the Ambisonic project, he also experimented with ‘dummy head’ recording, designed to be heard via headphones.

‘MAG’s Oxford contact, Edmund Rolls, briefly came and brought his tiny microphones used for his vertical sound localisation experiments – he didn’t have a dummy head to use them on so Richard sat during the rehearsal with the wires stuck to his cheeks with strips of red plastic tape and the microphones stuck inside his ears – hilarious! The NRDC set-up didn’t arrive till later’ with Professor Fellgett. ‘An odd programme for the concert – only the Messiaen [Trois Petites Liturgies de la Présence Divine] worth listening to.’ (Michael’s two-channel tapes of the Messiaen are on C236/251-252 and of the Requiem by Duruflé are on C236/253). 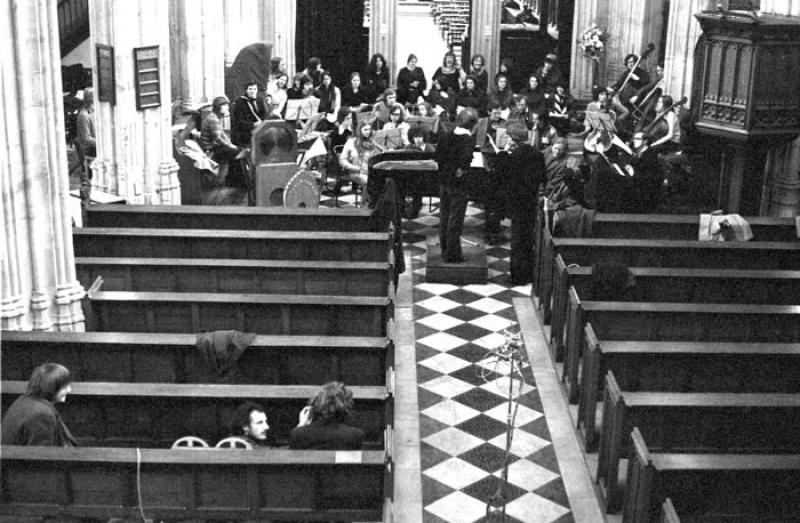 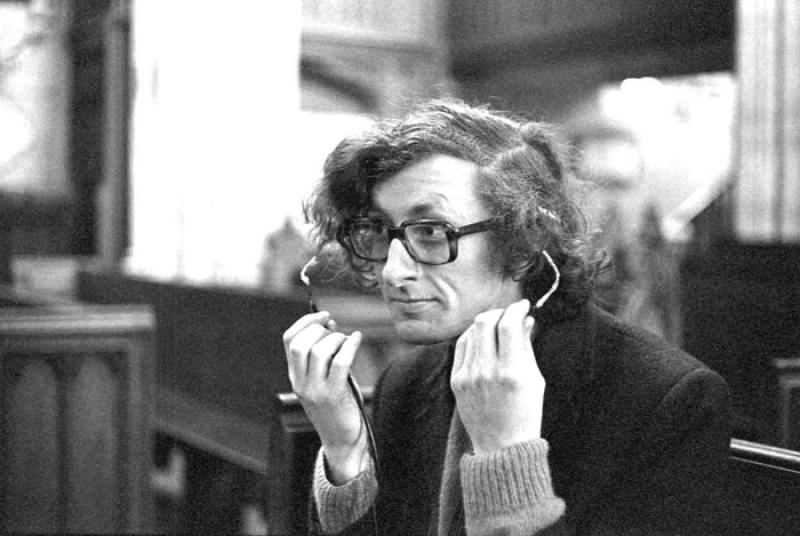 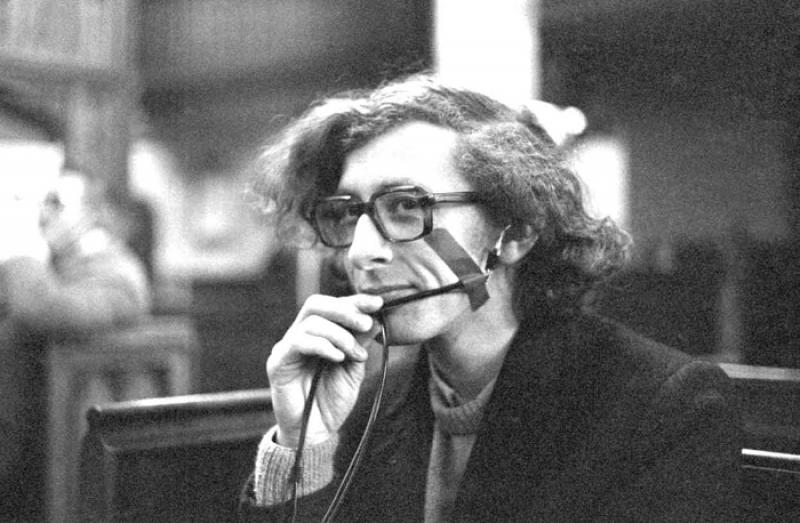 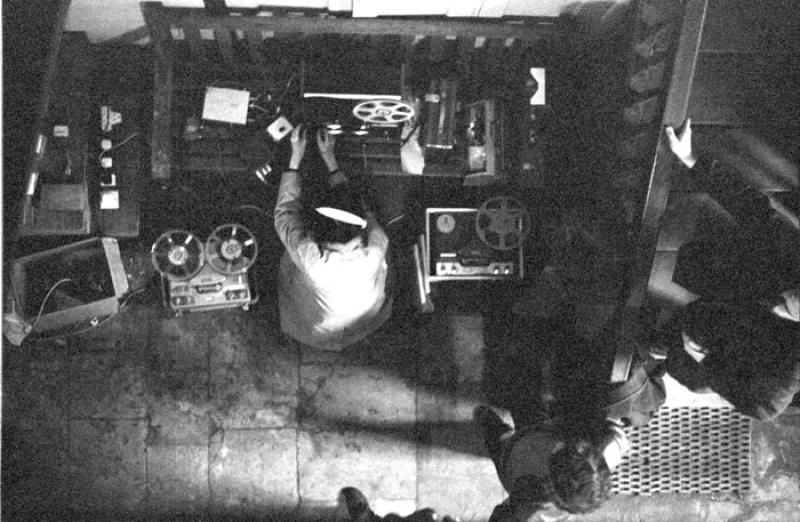 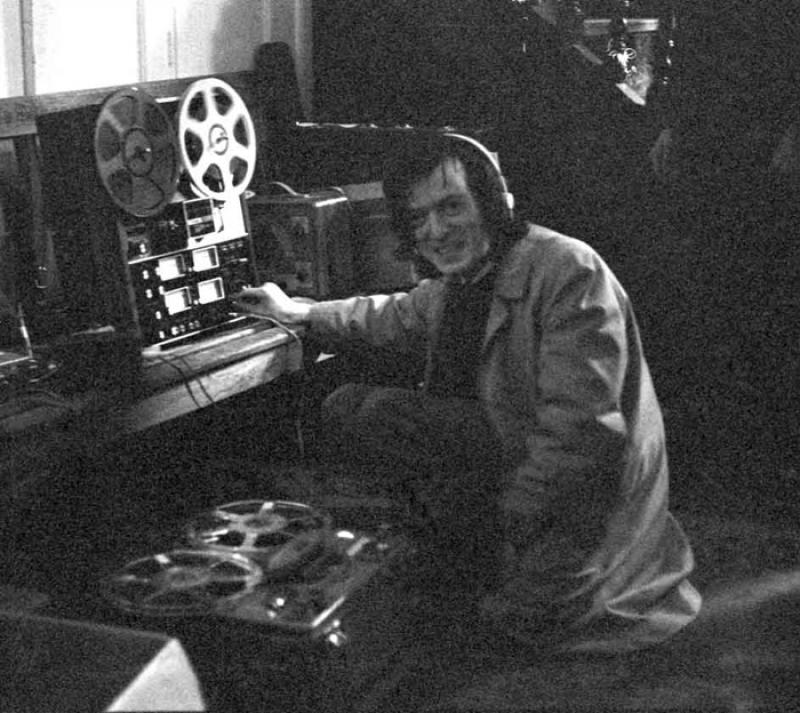 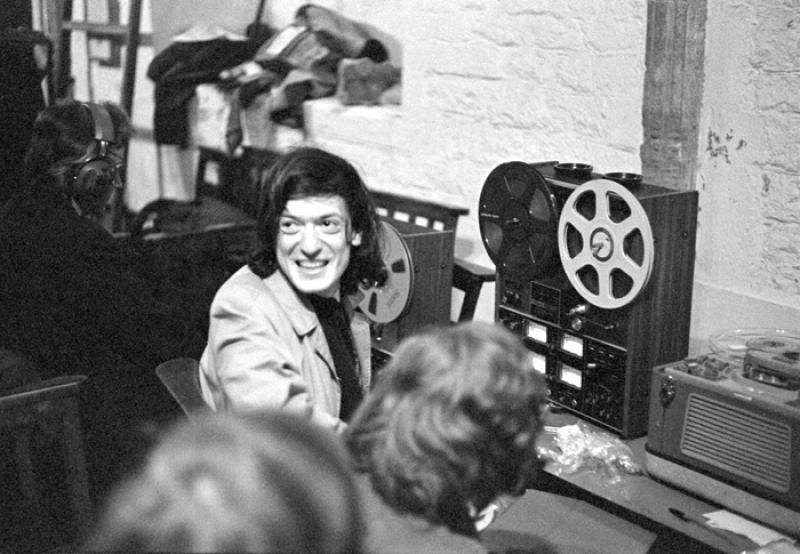 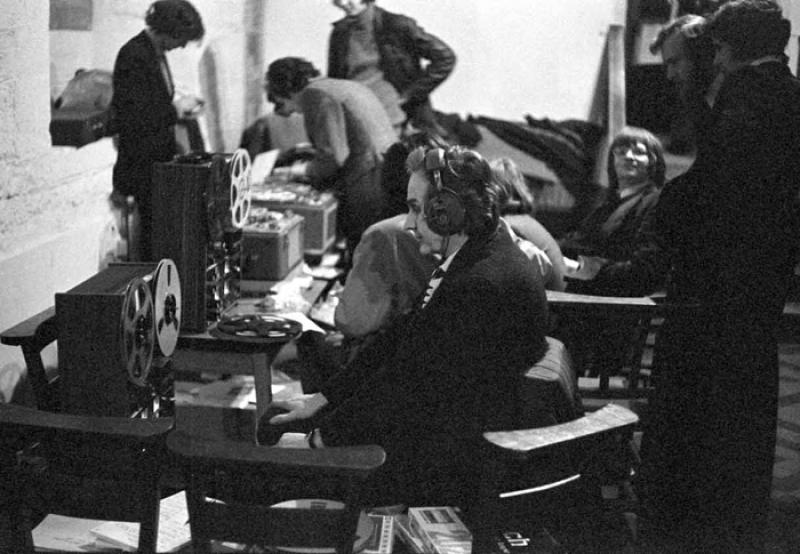 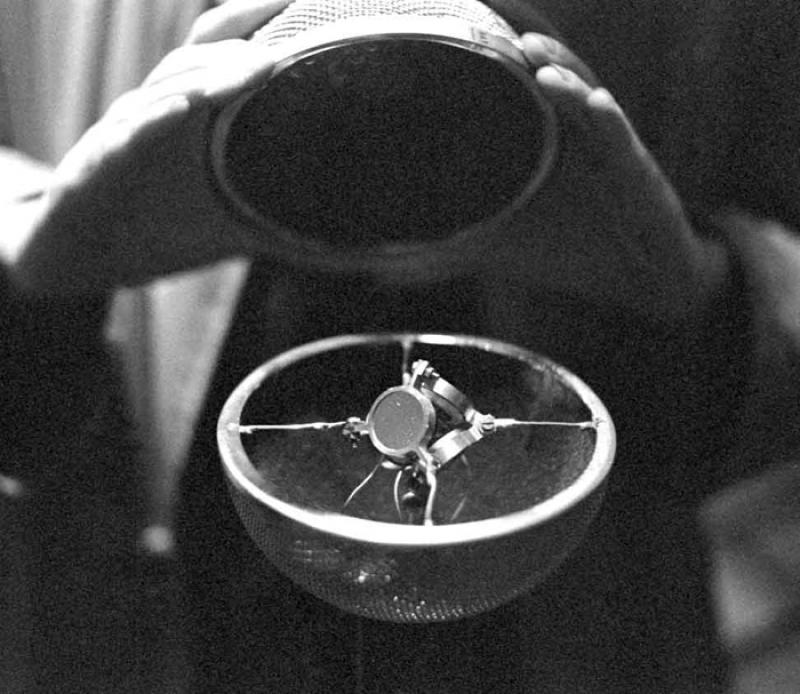 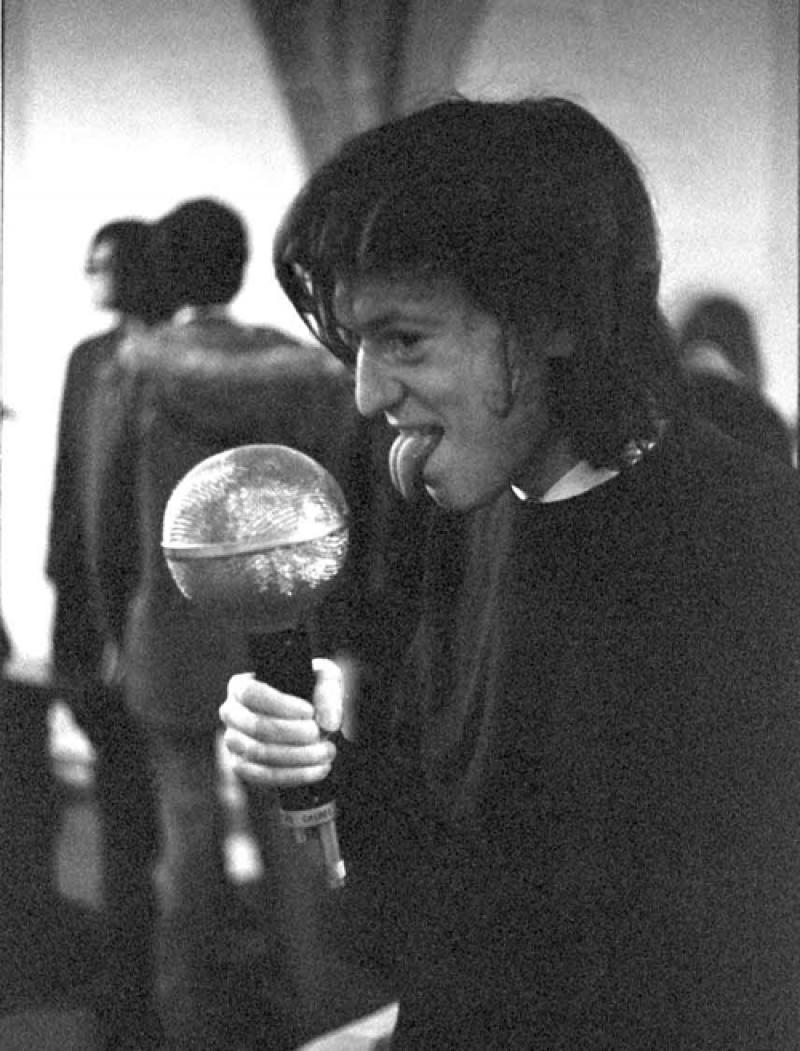 Michael published an article entitle ‘Dummy Head Recording’ in the May 1975 issue of Studio Sound.

Recently, there has been a lot of interest in dummy-head or binaural recording for reproduction via headphones. This has been presented by some as “the answer to quadraphony”, and some ill-informed comment has thoroughly confused people as to the advantages and disadvantages of binaural techniques.

He explained that binaural recordings contain three main types of sound-localisation cue that is absent from conventional stereo: time delays between the ears, an acoustical shadow cast by the head across each ear for sounds from the opposite side, and the effect of the pinnae (the flaps on the ears). Michael quoted the results of experiments demonstrating the importance of the pinnae. I can imagine Michael chuckling to himself as he wrote,

Dr Edmund Rolls, of the Department of Psychology, University of Oxford, has recently been conducting experiments in dummy head recording, using small microphones placed in the ears of actual people (although one conjectures that they may resent being termed “dummies”). This microphone technique, so purist that advocates of Blumlein technique must blush with shame, is capable of giving very superior binaural results, as would be expected with such accurate dummy heads.

Professor Fellgett and Michael published two back-to-back articles on Ambisonics in the August 1975 issue of Studio Sound. In ‘Ambisonics. Part one: general system description’, Professor Fellgett outlined the aims of the project and its characteristics. He began by reviewing the severe inadequacies of existing quadraphonic systems, and went on

Against this background, Ambisonics may be seen as a basically straightforward technology for surround-sound reproduction, designed from the beginning to accept all competent source material, and to make the best use of the available resources in channels (two or more) and loudspeakers (any reasonable number), neither seeking to reproduce a derived ‘original’ nor attempting or pretending to communicate more channels-worth of information than there are channels in the system.

Professor Fellgett went on to describe the sound field microphone.

This is an omni-directional microphone in the true sense, which is the opposite of non-directional; it characterises in a symmetrical manner the waveform and directionality of sound arriving from any direction (including vertical components).

He was at pains to emphasise the difference from the conventional tetrahedral arrangement.

It is worth noting that the sound-field microphone depends on placing capsules in accordance with Sampling Theory on a sphere, and the associated circuits are an integral part of it; the superficial resemblance of the lowest-order form to the well-known tetrahedral array of separate microphones is mainly misleading.

Michael’s article is entitled ‘Ambisonics. Part two: Studio techniques’. He contrasted the aim of the Ambisonic system – ‘to record, to convey to the consumer, and to reproduce an accurate and repeatable surround sound directional effect’ – with that of quadraphonic systems, ‘which is to duplicate in the home the defects of a pair-wise mixed mastertape.’ He reiterated his previous finding ‘that three channels of information are optimal for accurate image localisation… Thus, the basic horizontal encoding specification has to be three-channel.’ Again, he proposed that the fourth channel available in most studio equipment should be used for encoding height information, and referred to ‘the Calrec sound field microphone… [which] has been developed by the present writer for the NRDC…’

It is noteworthy that although Michael was a ‘purist’ when recording live concerts, preferring to use coincident microphones, he fully recognised that this may not be appropriate for other types of material. Most of the rest of the article is devoted to a description of novel ‘pan-pots’ that could be used by the creative producer to place a given sound anywhere within the sound field. These devices were not then available, and Michael realised that their adoption was key to the success of the Ambisonic system as a whole. I well remember his glee when describing the ‘waltz’ control, which ‘allowed the full rotation of a whole encoded sound field, a facility not possible with [the] discrete approach.’

that the ambisonic technology developed for the NRDC… is compatible with several existing and proposed coding systems. It gives enhanced creative possibilities to the producer both by ensuring that what he hears will be substantially passed on to the consumer despite differing loudspeaker layouts and seating positions, and by giving him convincing side localisation and smooth “circling” effects.

Finally, he stressed the novel features of ‘the sound field microphone [which] allows uniquely accurate recording, storage and playback of natural sound fields, with all their attendant advantages.’

We held a playback session of ambisonic recordings in St John’s College in January 1976, to which Professor Fellgett brought the sound field microphone and a four-channel tape recorder. Michael gave a talk to OUTRS members, illustrated by recordings. I don’t have any notes of this session so the photos will have to speak for themselves! The speakers are in a square layout at floor level so we must have listened to horizontal surround sound only (i.e. without height). 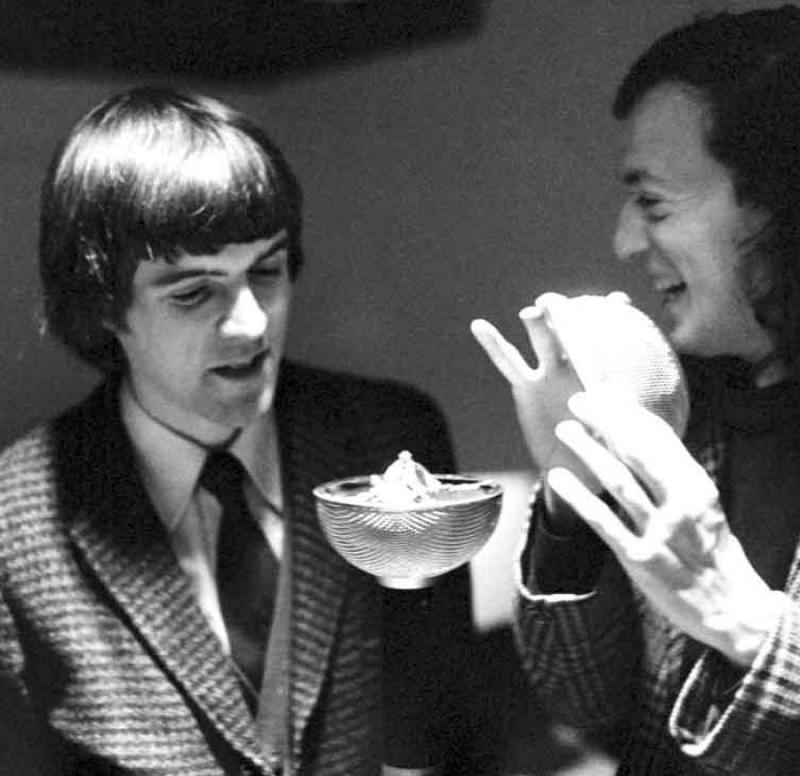 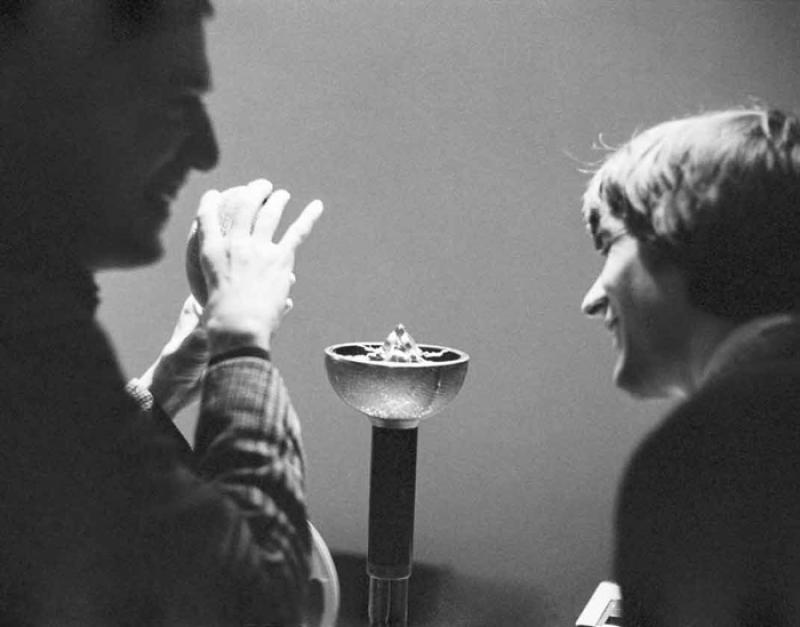 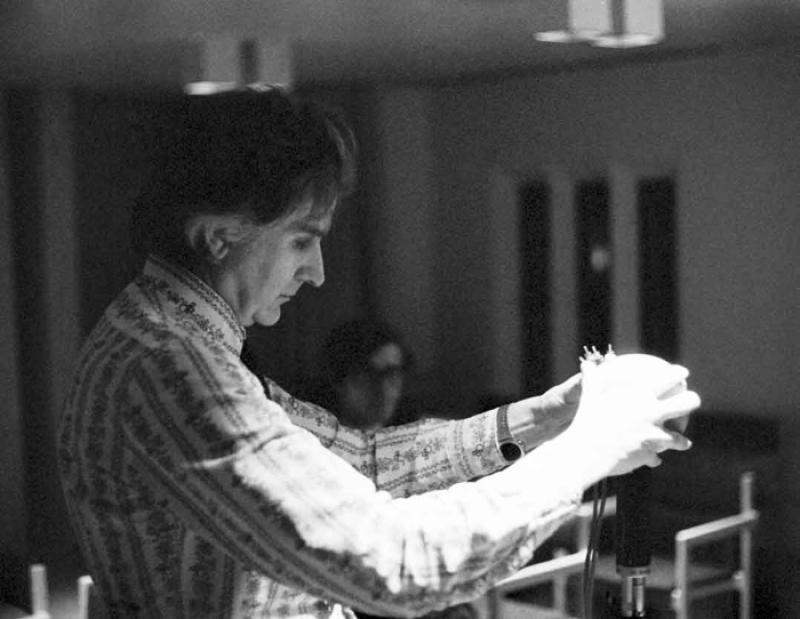 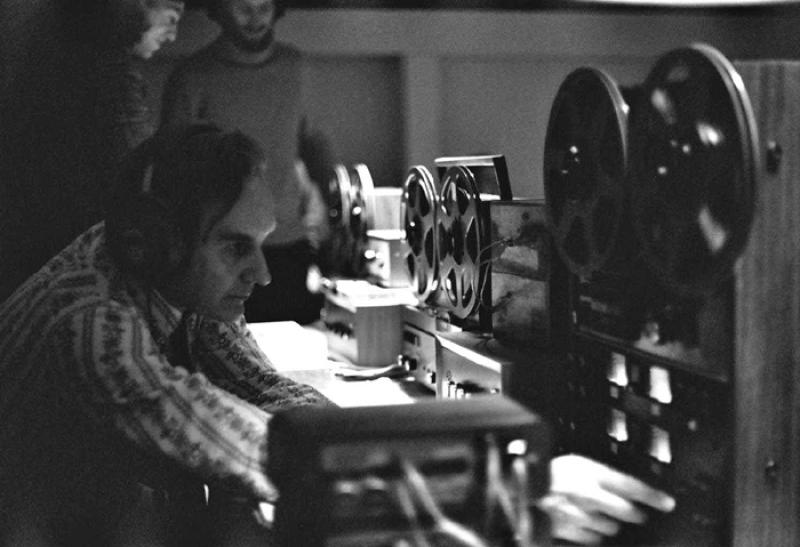 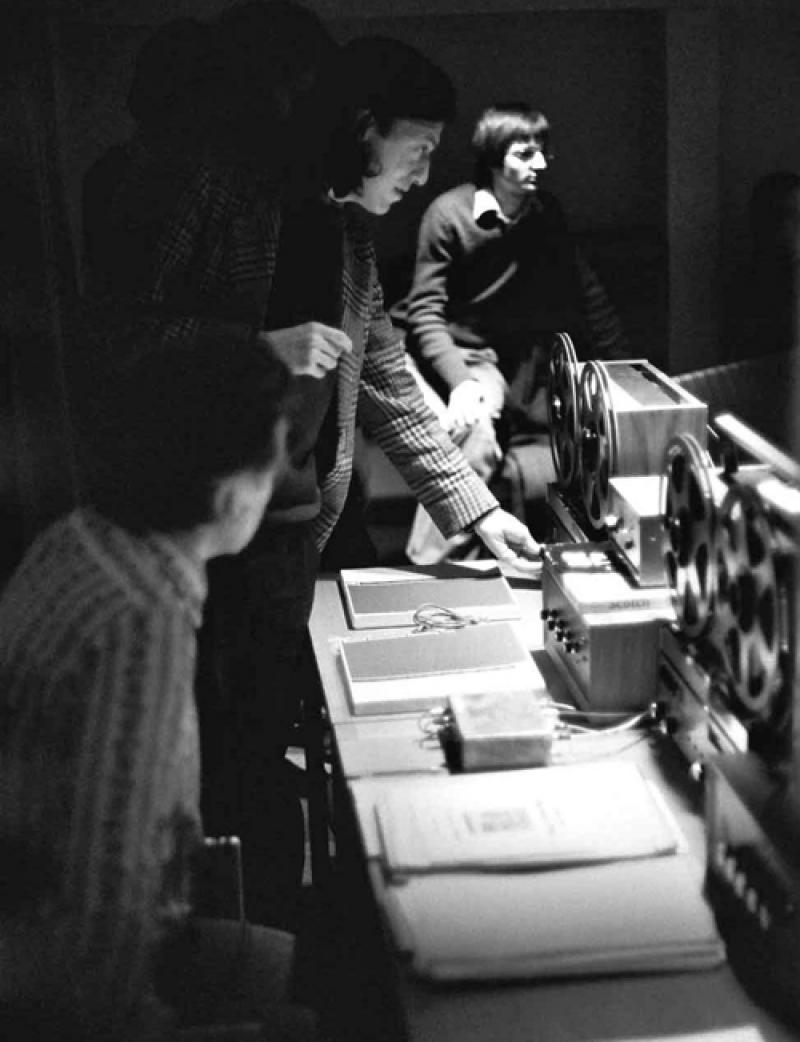 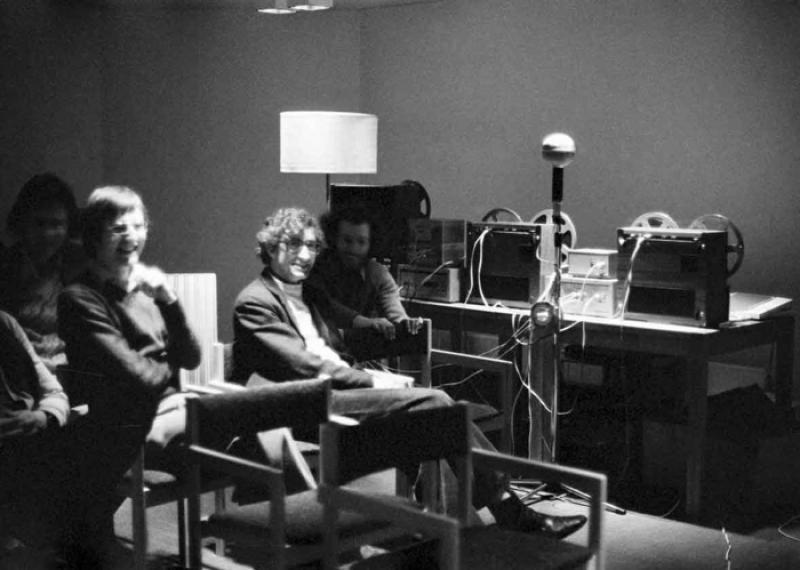 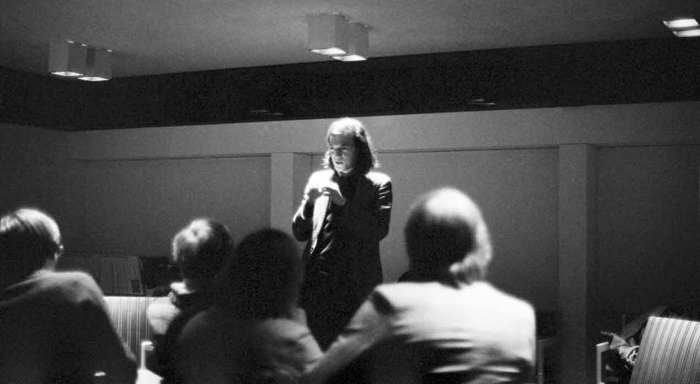 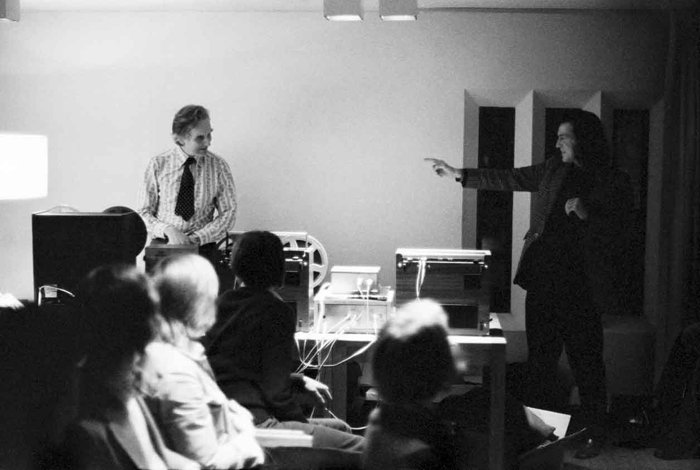 The Ambisonic system, in common with other four-channel systems, was not a commercial success, in spite of its claimed advantages. However, a version of the sound field microphone is still in production.