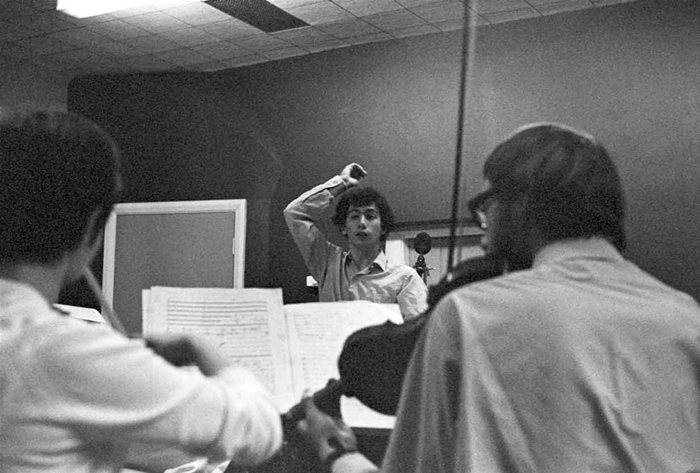 A single 4038 is used for a mono recording of film music in St John’s College Music Room (November 1969).

Oxford Town Hall was not a favourite location, mainly because we didn’t like the acoustic, but also because we had to suspend the microphones in mid-air. This made it difficult to adjust their position, and risked exposure to unpleasant vertically-directed high harmonics, especially from the violins. 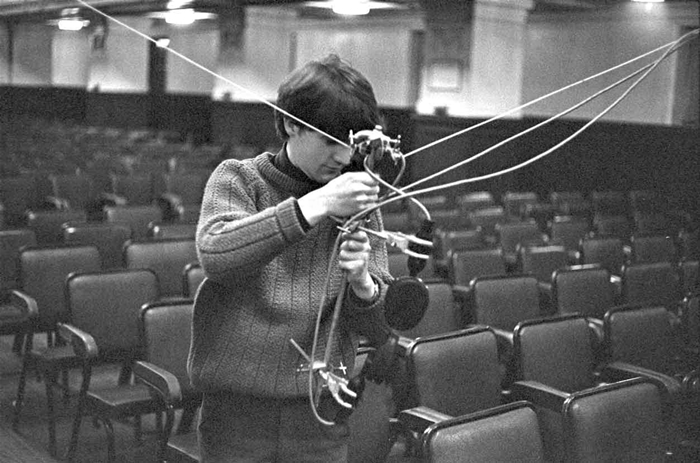 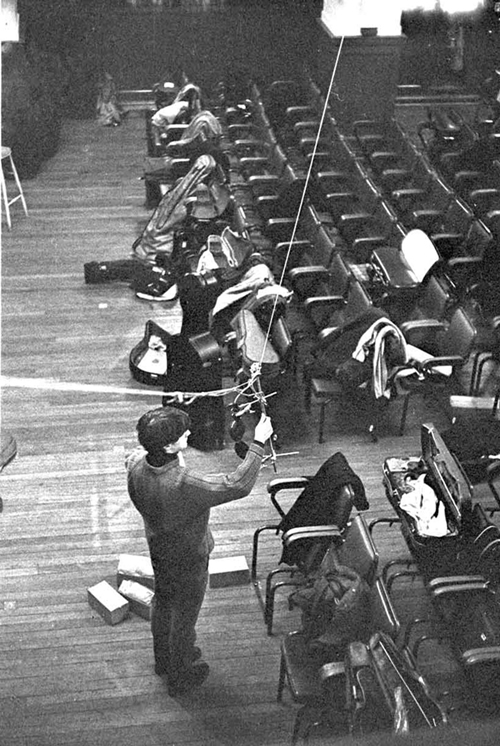 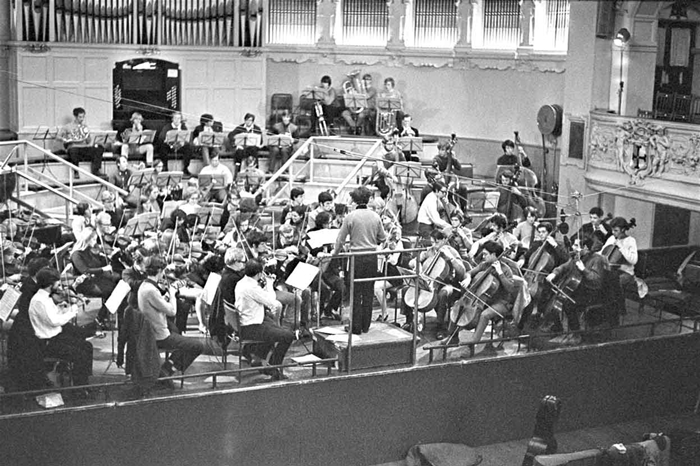 Finally rigged… the microphones can be seen just above the head of the cellist at the right hand end of the front row. 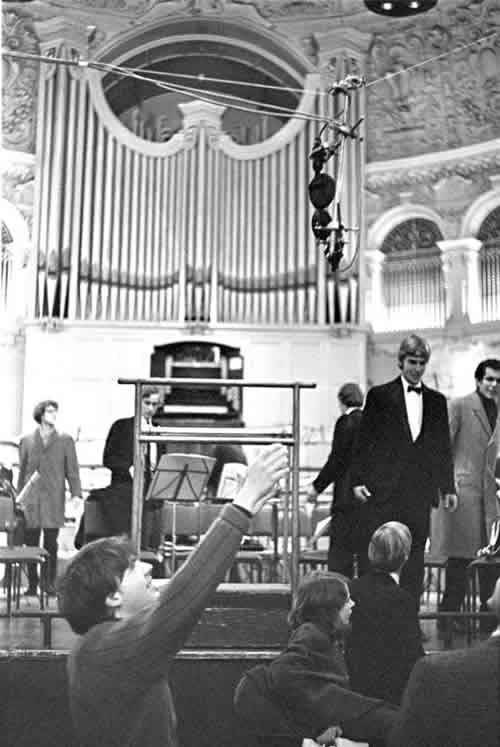 Aftermath… Peter prepares to retrieve the rig as it is lowered at the end of the performance.

The concert was the inaugural performance of the Oxford and Cambridge Philharmonic Orchestra, with works by Schubert (Overture in C), Brahms (Piano Concerto No 1 in D minor, Op. 15), and Stravinsky (The Rite of Spring).

This particular session was fraught because of missing equipment and problems rigging the microphones. ‘Fortunately, Michael didn’t turn up, otherwise Philip at least would have had a nervous breakdown!’ When we listened to the rehearsal tape, the piano was too far forward in relation to the orchestra, but we weren’t able to move the microphones for the performance. The next day we listened to the performance tapes.

The sound is still dull, even with the Quad [control unit] treble control at plus 2. The piano was too close in the Brahms, like the BBC – we needed the mikes a bit higher. The performance of the Stravinsky was quite good – splendid barbaric sounds!

The BBC generously allowed us to make a simultaneous recording when they recorded the Schola Cantorum of Oxford in a private session at Merton College Chapel. We were pleased that they followed the OUTRS microphone doctrine by using a single coincident pair of AKG C24 microphones, but there was a marked difference in where they were placed. The BBC microphones were more than twice as high in the air as ours, and less than half the distance from the choir. 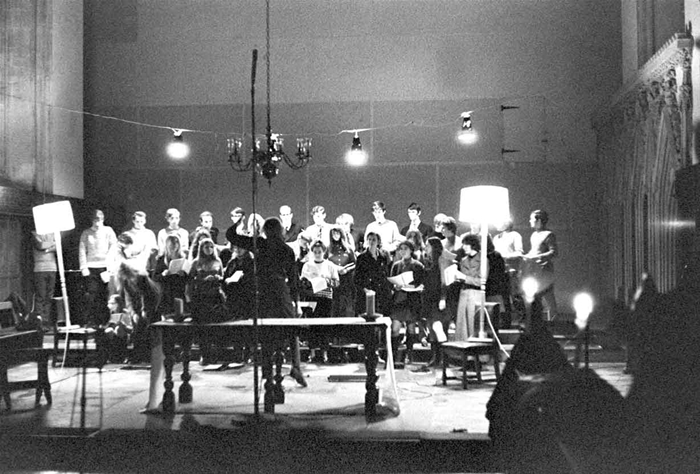 The BBC stand rears its head into the air, while the OUTRS pair of 4038s unobtrusively appears to the right of the left hand lamp. (January 1970). 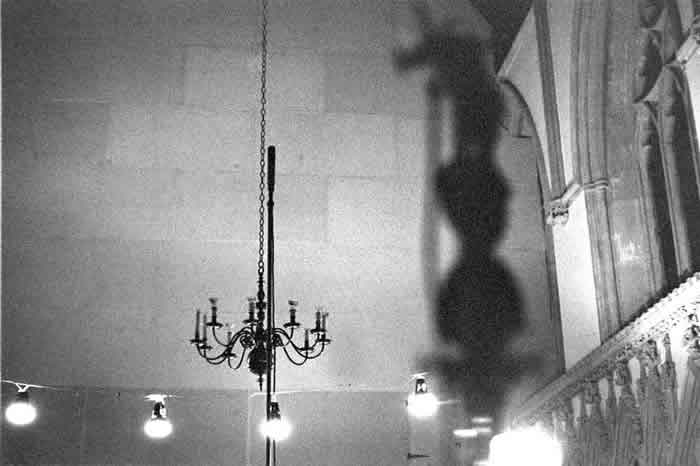 This low angle shot dramatically highlights the difference in height. 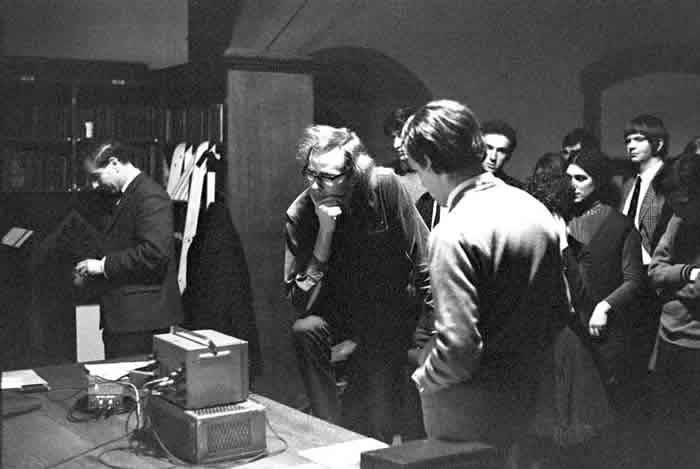 Conductor Andrew Parrott listens attentively to the playback. Michael is just visible on the far right, with head lowered and arms folded.

gave us a chance to confirm our prejudices of horrid BBC practices, but not to crow that our tape was better than theirs – Peter’s TRD had a loose connection, so he only got the last 10 minutes or so. I hope MAG’s [Revox F36] HS version is acceptable. The BBC had a C24, far too close and high, Studers [tape recorders] and LS/3s for monitoring – v. dull and nasty-sounding speaker, but lots of tape hiss from [BASF] LR 56 – and they were compressing [the dynamics] a lot, too…MAG was in a better mood than usual. 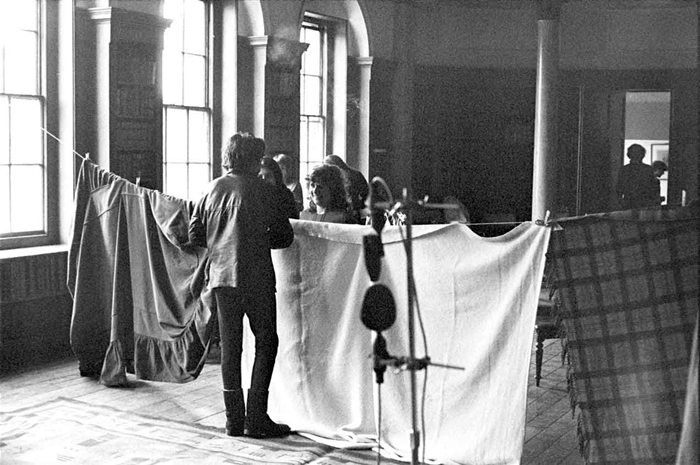 There was too much reverberation in the library at New College where we recorded Andromaque, by the 17th century playwright Racine, so we improvised with rugs and blankets to dampen it down. The play was performed in the original French, so editing the tape was quite a challenge for us non-linguists! (January 1970). 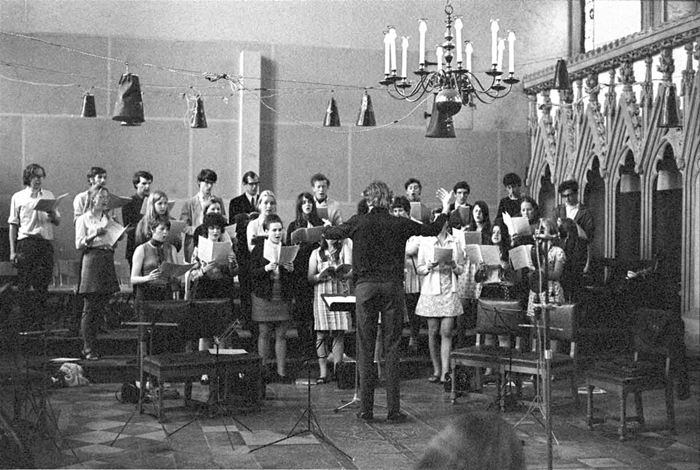 Philip (rear left), as a member of the Schola Cantorum of Oxford, sings into his own microphones at a rehearsal in Merton College Chapel. The 4038s can be seen obscuring the singer at the front right (May 1970).

The choir produced a fantastic noise! Will be interested to hear the tape, because after the … BBC session [see above] we decided to put the mikes closer, in fact they ended up where the BBC’s were, though not so high of course!