“..his commitment above all was to the integrity of himself and what he felt was his mission for humanity”

Michael Gerzon (1945 – 1996) was an extraordinary mathematician, inventor, sound recordist, music lover and poet, who died prematurely from a life-long struggle with severe asthma. 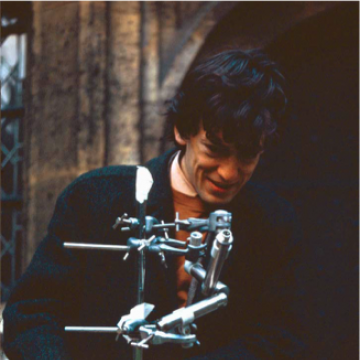 Described in his obituaries as: “one of the audio industry's greatest thinkers and writers” (1), a “prolific polymath” (2) and “genius” (3); he authored over 120 papers on aspects of spatial audio recording and reproduction, signal processing, systems theory and noise shaping.  However, perhaps his greatest achievements are the theoretical development of the Ambisonics surround sound system and, with Dr Peter Craven, the Soundfield microphone - together giving the ability to record and reproduce a three-dimensional 360˚ sound field from a single point.

The roots of the Soundfield microphone, and the genesis of Michael Gerzon’s Ambisonic theory, lie in work done by him and other student members of the OUTRS (Oxford University Tape Recording Society) from 1967 to 1972. 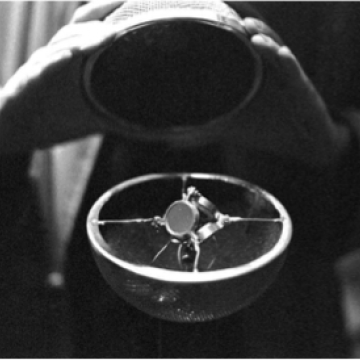 Through a series of experimental recordings in the chapels and music halls of Oxford, the OUTRS set on a trajectory which ultimately led to their first tetrahedral ‘Soundfield’ recording by them on the 8th May 1971.  Fortunately, OUTRS member Stephen Thornton documented and diarised their activities well - it is worth taking the time to explore this rich and detailed resource for a full picture of their astonishing activities and achievments.

After gaining an MA in Mathematics at Corpus Christi in 1967, Gerzon’s graduate study at the University of Oxford focused on Axiomatic Quantum Theory.  His peers at the Mathematical Institute viewed him to be brilliant, however due to him spending more and more time on sound recording and development work, coupled with severe bouts of illness and general frail health, he did not write up his thesis.

“He appeared in my room with a box of around 2000 pages of hand-written material …A lot of it was totally original – most of which (he) had thoroughly proved, nowadays having been subsequently done by other people – but Michael had done it first.  It was all very frustrating”.

Though he did not submit, Michael was allowed to continue to work at the Mathematical Institute from an office on St. Giles for some years, whilst simultaneously developing a career as a consultant to the audio industry.

At this time in the late 60s and early 70s, a number of competing four-channel surround sound systems were introduced to the general public – all with the same brand name: Quadraphonics.  The leading system SQ (Stereo Quadraphonics) was developed and backed by American broadcaster CBS.

Gerzon the mathematician was quick to recognise inherent flaws in their approach, and began to devise an alternative, based on his practical experience of music recording and listening with the OUTRS, coupled with ideas he had developed through his keen interest in psychoacoustics and the mathematical theory of spherical harmonics.  He called it ‘Periphony’, or the recording and reproduction of a full sphere of directions, including height.

He was subsequently asked by Professor Peter Fellgett to join a small team funded by the NRDC (National Research Development Corporation) quango, in order to develop a commercial British surround system, largely based on his theoretical work. This became Ambisonics. 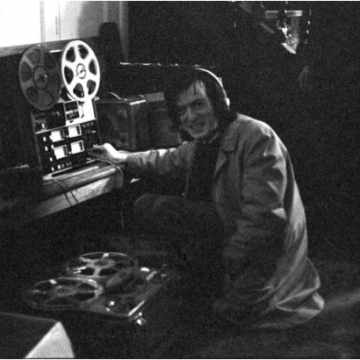 Over the next few years, Gerzon publicly denounced the Quadraphonics system.  He wrote various articles and more than once appeared at high profile CBS promotional demonstrations of the system.

On one occasion in 1971, he stood up amongst a crowd of onlookers and gathered press to explain in layman’s terms why Quadraphonics could not work for music, even preparing a wire model to visualise the problems!  The audience was bemused but receptive.  This was the first of many encounters with CBS.

In 1974, Gerzon and Peter Craven met for lunch in Oxford, some years after their pioneering OUTRS days.  Whilst walking amidst the dreaming spires, they imagined the possibilities of a “large football covered with individual microphones and a summing mixer…” they looked at each other realising they had hit upon something important.

Though they had explored tetrahedral recording with the OUTRS, the commercial concept of a Soundfield microphone was born that day, and in October 1975 they gave a demonstration of the first prototype to members of the OUTRS in Pusey House common room, Oxford; developed with microphone manufacturers Calrec.  From here, Gerzon worked with Calrec engineers Ken Farrar and Clement Beaumont on a series of successive prototypes, until Calrec’s first commercial release in 1978.

Throughout the 1970s, the battle for surround-sound did become a two-horse race; both Ambisonics and Quadraphonics in contention, but the public eventually grew weary.

A final chance seemed to come in 1979, when Gerzon and the Ambisonics team were invited to demonstrate their surround system at Dolby Labs, in the U.S.

Originally based in London, Ray Dolby and Michael had been long-time acquaintances from the days of the OUTRS. Since relocating to Hollywood, Dolby had had high profile success in stereo cinema sound with Star Wars and Close Encounters of the Third Kind and was now looking to license a surround-sound format - Ambisonics would have been a natural choice.

Unfortunately, a change in the British government's ruling party after election that year meant the NRDC’s budget was cut, Gerzon’s and others wages stopped overnight, and management of existing projects and license negotiations were re-directed.  The Dolby deal was never done.

“What Michael does now the world will want in thirty years' time".

Neither inter-dependant technology enjoyed commercial success upon release. Partly due to unreliability of the tape medium to accurately reproduce the four-channel 'B-Format' soundfields without dropouts and modulation, but largely because stereo was predominant and most broadcast and distribution hardware was just two-channel.  Switching to a new system required a substantial financial investment for the consumer, and stereo in the home was still relatively young.

Ambisonics has since remained a marginally used and little understood system, until recently.  It's ability to capture and represent a 360˚ spherical soundfield have made it the natural choice for use with Virtual Reality.  Now listeners can be immersed in a dynamic sound environment, wearing just headphones, that synchronises and moves with the VR visuals.  YouTube, Facebook and many other content providers and distribution platforms have adopted Ambisonics as the format of choice.  The future is looking bright!

Gerzon lived his entire adult life in Oxford, surrounded by his extensive and treasured collection of LPs and tapes, allowing few individuals access to his life.  A prolific sound recordist, with unusually acute hearing abilities, between 1966 and 1996 he systematically documented live performances in venues around Oxford, London and beyond.

An enthusiast of improvised performance, he was out most evenings recording countless concerts and gigs, usually with no fee involved, developing a working relationship with many artists including free-Jazz Saxophonist Evan Parker (who wrote Lines Burnt in Light as tribute upon his death) and early line-ups of known Oxford groups Radiohead (then called On a Friday) and Supergrass (then called The Jennifers).  Many thousands of his recordings, from the late 1960s up until his death are now archived at the British Library. (Search the sound collection, title: "Michael Gerzon")

He was a founding member and lead creative developer of WAVES audio products, now a leading worldwide manufacturer of software audio processors.  Many of their products are still based on early Gerzon theories and designs.