MAG on about dreadful new CBS 4-channel system – he’s out to stop it!

Poor MAG seems to be in a bad way at present, and he groans at the thought of all the papers he has to write up, as well as his thesis – serves him right for having so many ideas!

Michael battled illness and the audio industry during the summer of 1971, when a number of competing quadraphonic systems were being introduced. Michael wanted to be involved in their evaluation, but he ‘says he can’t review the Sansui QS1 4-channel synthesiser for Hi-Fi News after all – would mean too much work and equipment to set up.’

Is four-channel a gimmick?

Earlier, he had published an article called ‘Whither Four Channels?’ in Audio Annual 1971 in which he asked ‘is four-channel stereo anything more than a gimmick?’ He described seven qualities of live sound which are absent in two-speaker reproduction, including the sense of fullness given by reverberation coming from all around, the distance of the orchestra from the listener, an accurate sense of direction, a sense of height, and wide dynamic range.

The aim of 4-channel stereo is (or should be) to recapture as many as possible of these missing qualities of live sound in the home. It is evident to anyone who has heard commercial 4-channel recordings that only a few of these qualities have been captured, and that some new deficiencies have been introduced which are absent in ordinary stereo. Among the faults that I have noted with many 4-channel recordings are: an excessive quantity of reverberation …, a lack of precise directional information, a lack of any sound from the sides of the listener, the absence of height information, distracting echoes from behind the listener, and the lack of that sense of perspective which makes the orchestra appear to be at a natural distance from the listener. Much of the 4-channel sound heard is generally muddy and confused, and is less satisfying than ordinary old-fashioned stereo.

He was fiercely critical of the four channel CBS SQ system, which he believed was incompatible with his ideas on periphony set out in the articles on ‘The Principles of Quadraphonic Recording’ in Studio Sound. [Principles 1; Principles 2] (See also Tetrahedral Recording) . His objections were based on a thorough mathematical analysis which he wrote up and circulated in several reports, which are described later in this section.

‘MAG chasing after Peter Goldmark of CBS to say how terrible their 4-channel disc system is.’ My diary alternates comments like this with alarm at Michael’s poor health.

MAG has been in hospital with asthma – bad apparently, [and] they’re keeping him in for observation. Peter and I went to see him [this] evening and he was in his own little room bashing away [at a typewriter] on his latest “Matrix Systems for Four-Channel Stereo” paper which must be sent off soon to beat the CBS dreaded 4-channel system. He was very bouncy, not at all near death’s door as we expected, and issuing orders about how we’d got to get this article Xeroxed and sent off to all the important people, Benjamin Bauer, etc. He was very chuffed at some of his elegant proofs! Peter tried to explain later about Lorenz Groups etc. etc. – very tough going!

It is a tribute to Michael’s remarkable creativity and determination that he wrote this major theoretical paper of 145 pages under extreme time pressure when he was in such poor health.

CBS gave a demonstration of the SQ system at the Grosvenor House Hotel in London on 6 September 1971, less than three weeks after we saw Michael in hospital.

An Audio Engineering Society meeting, but thrown open to others as it was advertised at short notice. I went with Peter, and Michael came down from Birmingham, where he is recuperating after his stay in hospital. Apparently he had lunch with Benjamin B. Bauer of CBS, who was to give the demonstration. Michael has produced hurriedly a handout entitled “Some Anomalies in the CBS SQ System”, briefly outlining his criticisms without going into details, and referring people to his mammoth “Matrix Systems for Four Channel Stereo” paper. Apparently he’s managed to get a copy bound – he was intending to get one sent to the Library of Congress to establish copyright. 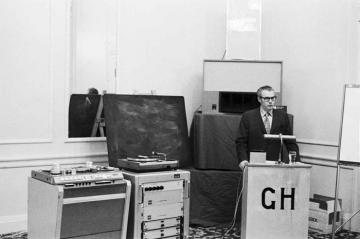 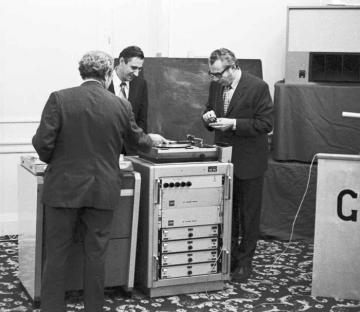 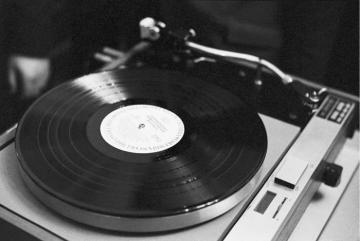 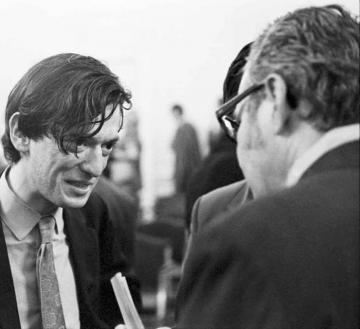 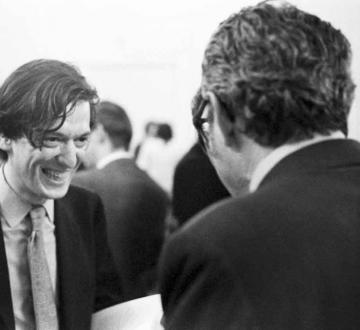 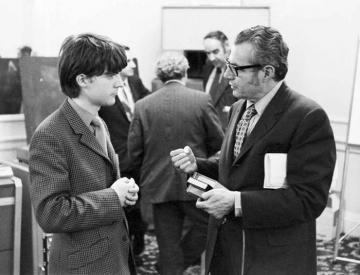 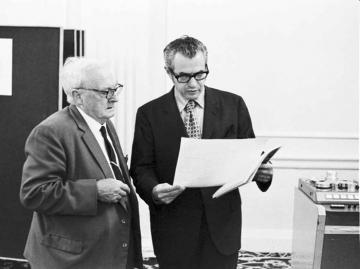 CBS gave a demonstration of the SQ system at the Grosvenor House Hotel in London on 6 September 1971, less than three weeks after we saw Michael in hospital.

An Audio Engineering Society meeting, but thrown open to others as it was advertised at short notice. I went with Peter, and Michael came down from Birmingham, where he is recuperating after his stay in hospital. Apparently he had lunch with Benjamin B. Bauer of CBS, who was to give the demonstration. Michael has produced hurriedly a handout entitled “Some Anomalies in the CBS SQ System”, briefly outlining his criticisms without going into details, and referring people to his mammoth “Matrix Systems for Four Channel Stereo” paper. Apparently he’s managed to get a copy bound – he was intending to get one sent to the Library of Congress to establish copyright.

The meeting was well-attended by senior audio people including Ray Dolby, inventor of noise reduction systems, Angus McKenzie, blind recording engineer and influential contributor to Studio Sound, and Percy Wilson, for many years Technical Editor of The Gramophone and grand old man of British audio.

The demo. room was about 30 feet square, with a large Ionic pillar bang in the middle, which didn’t help. Got there in good time, to find an SQ record playing quietly and emanating vast quantities of distortion through peculiar U.S. speakers. Bauer said a few words, then played a disc compèred by David Frost explaining how wonderful it was. Not getting anything from right rear at first, and Frost, whom we discovered later was supposed to be front centre, sounded anywhere on left hand side of diagonal drawn between left rear and right front. Mostly light music and gimmicky effects, played excruciatingly loudly and with gross distortion. They had a master tape which they ran too to compare – sounded better than disc, not surprisingly! The only piece of OUTRS-type [material] was a trumpet piece by Gabrieli, which sounded moderately convincing, though whether better than OUTRS 2-channel difficult to say without longer listening. Not ideal conditions in a hot and smoky room. So apparently the system works for what they want it for, i.e. reproducing sounds from 4 corners and centre front (using logic to reduce front/rear crosstalk). But hopeless for coincident mikes, for periphony, for multi-speaker layout etc – a real dead-end system. Both Michael and Peter talked to Bauer, then Peter and I left, leaving Michael holding forth to cronies like Granville Cooper et al. Will be bad if SQ system gets a hold, as it probably will.

The following day I spoke to Michael on the phone.

He’s feeling depressed
a) because of illness (not surprising – he’s got a hospital appointment tomorrow)
b) because of the SQ system – it’s definitely gone too far to be stopped, and it’s absolutely incompatible with coincident mike techniques, though the best system for gimmick US record industry – heaven preserve us!
c) he’s got an enormous backlog of audio material to publish – “almost frightening”, he says.
d) he’s got to find a flat where he can look after himself better than at 52 Walton Crescent – not a task guaranteed to help him recuperate.

Michael’s short paper ‘Anomalies in the CBS “SQ” Stereo/Quadraphonic System’ summarises his reservations about the SQ system. He was careful to point out that it was not intended as a ‘criticism of the painstaking work of those involved in the development’ of the system, but a warning that it was ‘incapable of coping with substantial improvements in the art of four-channel recording’. He emphasised that his ‘comments are based on difficult methods of analysis using the full resources of modern mathematical theory’, and referring readers to ‘a full theoretical analysis’ in his preprint ‘Matrix Systems for Four-Speaker Stereo I’

He briefly described the SQ system, and compared it with some of the other quadraphonic systems being introduced. Each system had its own advantages and disadvantages, the main advantage of the SQ system being its ‘excellent compatibility with conventional stereo reproduction’. The system had been designed to give the best possible results with ‘5 point directionality’ recordings, in which most sounds are recorded only in the five positions left rear, left front, front centre, right rear and right front.

This performance is obtained by an almost maximal use of the information inherent in 2 channels, and thus little room is left for further substantial development. The “five point” excellence has been bought at the expense of (i) a misbehaviour of the sounds near at least two of the corners, … which seems to manifest itself as a very blurred corner image; (ii) a high degree of overlap during linear playback …(iii) a tendency for front-centre sounds to jump to the rear (and vice versa) under the action of gain control logic circuitry.

Moreover, the SQ system contained no possibility of adding periphonic (with-height) information when this became feasible.

The criticisms in this report arise from a fundamental conflict about what 4-speaker stereo should achieve – i.e. the “5-point directionality” approach versus the “continuous 360 degree image” approach. It appears that the best 2-channel matrix system for the former philosophy (i.e. the CBS “SQ” system) inherently prevents the aims of the latter philosophy from being fully achieved.

Michael prepared a further critique with the devastating title ‘What cannot be recorded with the CBS “SQ” four-channel system’. He began by stating that there is

a wide variety of … effects of interest to producers of both classical and “pop” recordings that are incapable of being reproduced well, or even at all, via the “SQ” system, although certain of the competing … systems are well able to handle them. The following describes the permanent limitations producers will be subjected to if the “SQ” system is adopted as an industry standard.

He listed five positions in which recording was inadvisable, warned that the use of ‘overhead’ sound was impractical, noted that the system did not reproduce reverberation and ambience uniformly round the listener, pointed out that it was not possible to use coincident microphone techniques, and observed that the system was incapable of producing a height effect.

The possibilities of … periphonic systems will be forever unattainable, or cause expensive conflict between incompatible systems … if the record industry adopts CBS “SQ” as a standard system.

Michael went on to explain that at least two alternative systems were being developed which suffered from none of the faults listed. He concluded,

The CBS “SQ” system imposes severe constraints on the creative use of quadraphony, and many effects of interest to the producer are reproduced very imperfectly. It is inconsistent with certain major future developments (the addition of the full vertical dimension, and also the use of speaker layouts using more than 4 speakers) …There exist several competitive systems (in which the author has no commercial interests) which are free from these constraints.

Michael was obliged to emphasise that he was not at that time involved in any of the competing systems, because of suspicions within the industry that he was not being impartial in his criticisms of the SQ system.

Michael’s well-intentioned efforts failed to prevent the SQ system from being launched, and brought him into conflict with powerful vested interests in the audio industry. However, the SQ system was not a long-term commercial success.